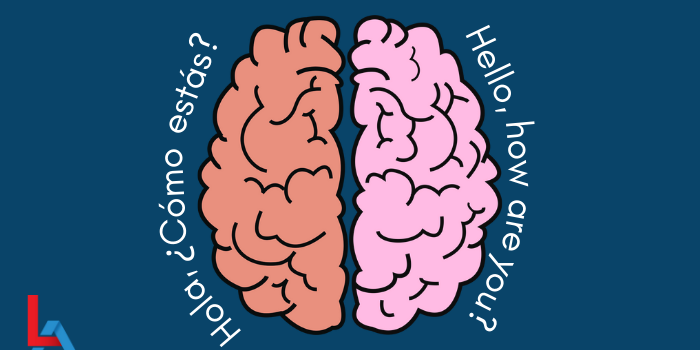 In the US it’s hard to believe, but it’s estimated that 50% of the world population is bilingual!

Besides being a great skill to apply for jobs, interact with different cultures, enjoy every type of content like blogs, movies and series in both languages, and even be able to develop talent at interpreting, they have some real benefits for the brain!

Bilingual brains are different… but how is that?

Here are 4 advantages that you probably don’t know about bilingual brains:

1- They have higher density of the grey matter: according to the educator Mia Nacamulli (2015) in the Ted Talk ‘’The benefits of a bilingual brain’’, the ability of speaking two languages gives you some undeniable assets, and one of them is having a higher density of the grey matter, which contains most of neuronal cell bodies related to muscles control and the 5 senses!

2- They enhance and fortify the ‘’Executive Control System’’: according to Research Professor of Psychology and Walter Gordon Research Chair of Lifespan Cognitive Development at York University, Ellen Byalistok (2012), when you are bilingual you are enhancing and fortifying the ‘’Executive Control System’’, which is a cognitive system that has the job of focusing attention and working memory. This was proved in a study she did on children and adults, where bilinguals outperform monolinguals in conflict tasks.

This also means that you have better cognitive skills because your memory and concentration ability improves and your mind becomes more ‘’flexible’’, meaning more open and capable of learning new things.

3- They have stronger social skills:  according to Ellen Byalistok (2012), being bilingual means you can empathize, understand, and socialize better with people because you have the ability to communicate with others easily wherever you go. This makes you connect and get closer to people in a world full of differences. It allows you to comprehend more people and more perspectives, which at the end of the day, makes you a better human in terms of knowledge and culture.

And, here’s the BIG BONUS:

According to Vince (2016) the estimated financial benefit of knowing a second language is up to $128,000 over 40 years. So bilingualism not only has mental, social and cultural benefits, it gets you extra cash! Many companies find value in bilingual employees because it lets them connect with more customers and reach new sectors and countries in this global economy.

Well, are you bilingual? Did you know all these benefits?

If you aren’t, there’s no problem, we can take care of that (for more than 90 languages) 😉 have a great day!

Nacamulli, M. (2015). The benefits of a bilingual brain. TED: ideas worth spreading. Retrieved from https://www.ted.com/talks/mia_nacamulli_the_benefits_of_a_bilingual_brain/transcript#t-4955TED Talk

Vince, G. (2016). The amazing benefits of being bilingual. BBC. Retrieved from https://www.bbc.com/future/article/20160811-the-amazing-benefits-of-being-bilingual

3 reasons why you need a language interpreter in healthcare
May 18, 2021

What do you know about the English, Spanish, and Chinese Language?
April 21, 2021

How Many Interpreters is Enough?
November 20, 2020

Out of Resources? Be resourceful!
November 1, 2020